Four Freedoms Park Conservancy (“FFPC”) is a nonprofit organization formed in 2011 by the Park’s founders to preserve this architectural masterpiece and serve as a national monument to human rights. Under the FFPC’s watch, the organization transformed this meaningful space into a beloved and well-used public resource.  After raising $60 million to build the Park to its full potential, FFPC gifted the Park to the State of New York. As New York Times architecture critic Michael Kimmelman declared of the Park in 2012, “It gives New York nothing less than a new spiritual heart.”

Now, FFPC will build upon its successful World Pride and 19th Amendment campaigns to focus its efforts going forward on creating impactful programming informed by FDR’s four freedoms and ensuring preservation of the Park as our national human rights memorial.

The importance of the four freedoms and what they represent is more important today than ever before, particularly as these fundamental rights come under siege. The Board seeks the commitment of dedicated and passionate Board Members to add their voices to its purpose through inspired leadership and philanthropy.

This is the unique opportunity to actively influence and shape the future of the institution at a pivotal moment in our nation’s history as it considered new ways to engage the country to ensure the protection of human rights and the prioritization of social justice in each and every strategic and programmatic decision.

Koya Leadership Partners has been exclusively retained for this search. Koya is a retained executive search firm that specializes in mission-driven search. Anne McCarthy and Malissa Brennan are leading the engagement. To express your interest in this opportunity please email the team at [email protected]. All inquiries and discussions will be considered strictly confidential.

Four Freedoms Park Conservancy is an equal opportunity employer and strongly encourages expressions of interest from people of color, persons with disabilities, women, and LGBTQ+ applicants. 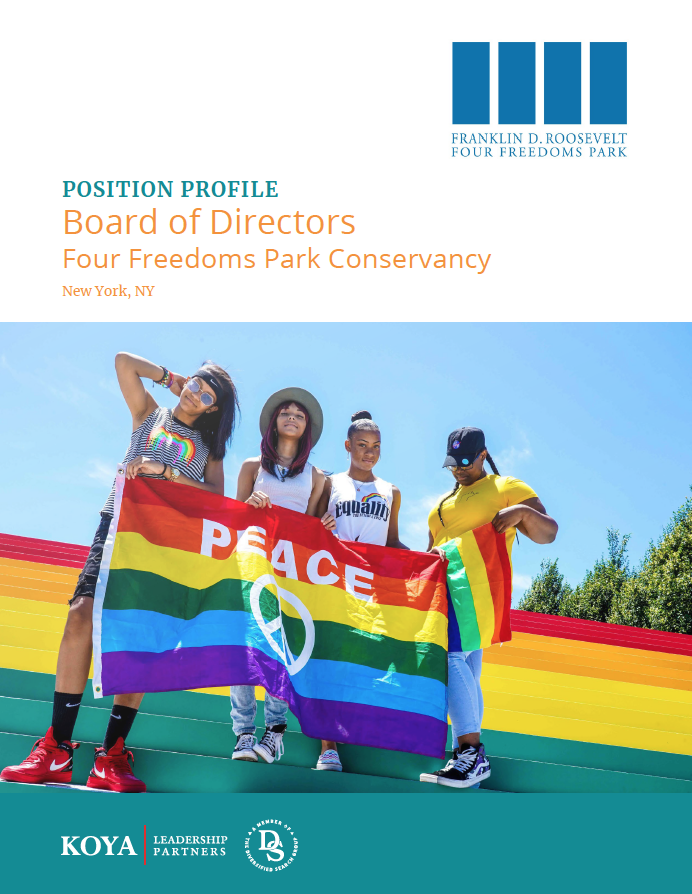 To make a nomination or refer a candidate, please include the name of the organization and title of the search in the subject line of your email.