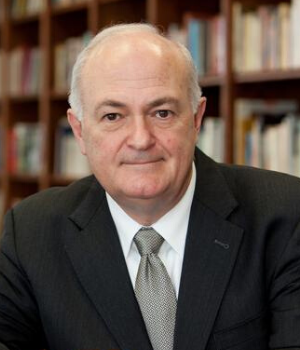 A CMP Pre-Search Committee had completed a comprehensive study of the entire organization to determine desired changes in governance, organizational structure and culture before embarking on this search.

The search led by Koya resulted in the recruitment of Steven Knapp to the role.

Knapp joined CMP from George Washington University (GW), where he served as President from 2007-2017. Knapp remained at GW as an English Professor after retiring from the Presidency.

During his 10 years as President of GW, Knapp arranged for the university to turn the Corcoran Museum of Art, a landmark Beaux-Arts building, into the Corcoran School of Arts and Design. The school operates a museum studies program in the building.  The George Washington University Museum also moved into the landmark.  Knapp also established a school of nursing at GW and oversaw the construction of the university’s new science and engineering hall, which doubled the space available for those programs.

Knapp was elected to membership into the American Academy of Arts and Sciences in 2011.  He is a  member of the Council on Foreign Relations and a member of the Modern Language Association.

Among many other appointments, he is the Chair of the Board of Directors of the Institute for Ecological Civilization and a Board Member of Second Nature. He has also served on the Boards of the Economic Club of Washington, the World Affairs Council and the National Symphony Orchestra.

Knapp is an accomplished author and musician.  At GW 2012 Alumni Weekend, he played a solo on the congas on stage with Earth, Wind & Fire.