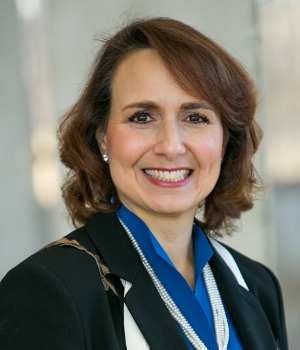 The search resulted in the successful recruitment of Maria Salterio Doughty.

Doughty has spent her career in the private sector and as a nonprofit board leader advocating for the advancement and empowerment of women.

Doughty joins The Chicago Network from the Allstate Insurance Company, where she spent 23 years in senior legal, public policy, governmental affairs, and community relations positions and headed the company’s global efforts to create senior leadership opportunities for women.  Over the course of her years at the company, she served in a variety of executive level roles, most recently leading the public policy team that identified and developed Allstate’s public policy positions and advocacy strategies.

Throughout her career at Allstate, Doughty developed programs to inspire and empower women to achieve their personal and professional aspirations. As the global leader of the company’s women employee resource network, Doughty helped increase membership to nearly 4,000, connecting executive female officers with senior female leaders, and providing targeted programming, including mentoring.

Doughty began her professional career as a corporate lawyer in Atlanta and Chicago. She was a litigator at the law firms of Johnson & Bell in Chicago, Illinois and Fortson & White in Atlanta, Georgia.

In addition to her success in the private sector, Doughty has focused her leadership skills and passion for community engagement to serving diverse communities and battling violence against women. She serves as Board President of both the Latino Policy Forum and the Illinois Coalition Against Domestic Violence.

Doughty also serves as Co-Chair of the Illinois Task Force for Employment and Economic Opportunity for Persons with Disabilities.

Doughty is a Leadership Greater Chicago Fellow, the region’s premier convener, connector, and mobilizer of bold leaders to effect transformative civic impact across the region. Since 1983, Leadership Greater Chicago has developed more than 1,200 of the region’s most promising leaders through an intensive 10-month Fellows program designed to provide the foundation for a lifelong commitment to civic engagement.

The daughter of Italian immigrants, Doughty was the first in her family to attend and graduate from college. She received her B.A. and her J.D. from Emory University in Atlanta. She completed postgraduate work as a Robert T. Jones Scholar at the University of St. Andrews, in Scotland.