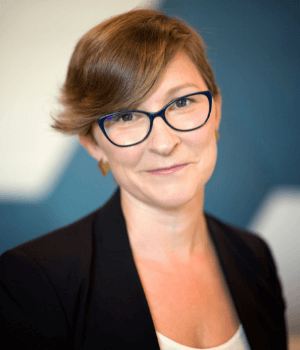 Koya partnered with International Living Future Institute (ILFI) on its CEO search. ILFI’s mission is to lead the transformation toward a civilization that is socially just, culturally rich, and ecologically restorative.

Our work resulted in the appointment of Lindsay Baker, a climate leader with deep experience in technology, real estate, and sustainability.

Baker is an environmentalist, a building scientist, and she’s been at ground zero for some of the green building movement’s most seminal moments. She also is a climate entrepreneur with experience launching and growing innovative new businesses.

Baker’s experience in the green building movement began at the Southface Institute in Atlanta, where she interned before attending Oberlin College for her undergraduate degree. She was one of the first 40 staff members at the USGBC, charged with finding consensus about what LEED would become, as the organization experienced its first period of high growth.

Baker continued her career in a role with Google’s Green Team, and later co-founded a smart buildings start-up called Comfy, which grew over five years to 75 employees and a global portfolio of clients. She was the first Global Head of Sustainability and Impact at WeWork, where she built the corporate sustainability team and programs from scratch. In addition, she is a Senior Fellow at the Rocky Mountain Institute, a lecturer at UC Berkeley, serves on several non-profit boards, and is an advisor and board member for numerous climate tech startups.

Baker earned a bachelor’s degree in Environmental Studies from Oberlin College. She holds a master’s degree from UC Berkeley in Architecture with a focus on Building Science. Baker spent five years as a building science researcher at the UC Berkeley Center for the Built Environment.