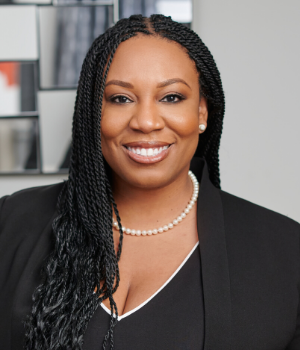 Koya partnered with the National Center for Lesbian Rights (NCLR) in the search for its next Executive Director. Since 1977, NCLR has been at the forefront of advancing the civil and human rights of the LGBTQ community and their families through impact litigation, public policy, and public education.

Our work with NCLR resulted in the recruitment and placement of Imani Rupert-Gordon.

Imani Rupert-Gordon has spent her career as a social justice leader and activist who frequently speaks on issues of race, gender, sexual orientation, and their intersections.

For the past four years, Rupert-Gordon has served as the Executive Director for Affinity Community Services. Affinity is a social justice organization that works to support and provide resources for all LGBTQ+ individuals by highlighting the experiences of Black LGBTQ+ women. Imani was a transformational leader at Affinity. Under her stewardship, the organization expanded its operating budget, developed new signature events, and increased its programming reach. With Imani at the helm, Affinity hosted the first ever Blackprint, an initiative designed to build the leadership capacity of Black LGBTQ+ women.

Prior to her time at ACS, Rupert-Gordon served as the Director of the Broadway Youth Center (BYC), part of Howard Brown Health in Chicago. Imani led BYC through a period of transition. During the most tumultuous time it BYC’s history, Imani worked in coalition with community partners and local government to ensure that BYC’s services continued uninterrupted. Imani oversaw the expansion of services at BYC, improved relationships between BYC and the larger community, and helped establish a more sustainable budget through increased donor participation.

Rupert-Gordon held several positions at the University of California, Santa Cruz (UCSC). Imani served as a lecturer and created intersectional programming for students and staff. At UCSC, Imani was a founder of the incredibly popular Social Fiction Conference that helped individuals dismantle biases and examine issues of social justice through science fiction, gaming and fantasy.

Rupert-Gordon serves on the Illinois State Treasurer’s LGBT Advisory Council, and on the governing board of United Way of Metropolitan Chicago’s United Pride Executive Committee. She is a founding board member of Point the Way, an initiative that supports community-based organizations in Chicago’s most under-resourced areas with significant, sustained and strategic investments.