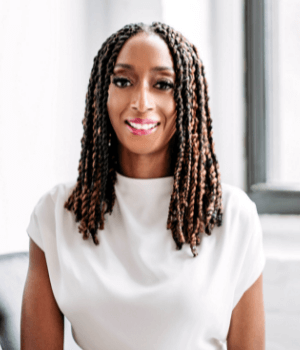 Koya partnered with Emerge on the appointment of A’shanti F. Gholar as President.

Emerge is the only organization dedicated to recruiting and training Democratic women to run for office. Emerge is the only political organization that focuses on effective state and national programming that gives women the tools they need to run and win, as well as building an inclusive sisterhood of alums and a network of alumnae, staff, boards and volunteers.

In her role as President, Gholar leads the organization and steers its overall strategy and direction, overseeing a national staff as well as affiliates across the country.

A’shanti is a nationally recognized political strategist, who most recently served as Emerge’s Political Director, responsible for strengthening national partnerships and working closely with state affiliates to strategically recruit for key seats, as well as directing the organization’s overall political strategy. For 15 years, A’shanti has been a grassroots organizer and activist for women, communities of color and progressive causes. She has experience in building coalitions, program development and community and political engagement. Prior to coming to Emerge, A’shanti served as the National Deputy Director of Community Engagement and Director of African American Engagement for the Democratic National Committee. A’shanti has also served as the Manager of National Partnerships for United Way Worldwide, as a political appointee in the Obama Administration at the U.S. Department of Labor and as the Director of Public Engagement for the 2012 Democratic National Convention Committee in Charlotte, NC.

A’shanti was recognized as one of She The People’s 20 women of color in politics who would play an impactful role in the 2020 elections and beyond. She was featured as a political influencer in CQ Roll Call Magazine, named a top woman of color in policy by Walker’s Legacy, and was awarded the “Changemaker” award by African American Women in Business Careers. In addition, A’shanti serves as an Advisory Board Member for Global GAIN, as a Sisters on the Planet Ambassador for Oxfam America, and is an Aspen Institute SOAR Fellow. She is also the founder of The Brown Girls Guide to Politics, which was named one of the top political podcasts by TIME Magazine and Marie Claire.