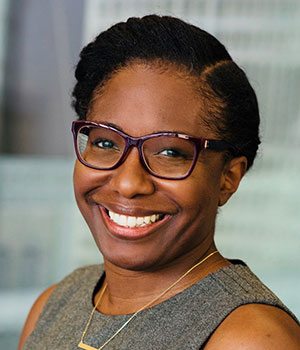 Koya Leadership Partners is pleased to have placed Alesha Washington as Senior Program Officer for Community Revitalization and Economic Development at the George Gund Foundation.

Alesha Washington is the Senior Program Officer for Community Revitalization and Economic Development for the George Gund Foundation. In her role, Alesha leads investment strategies to impact the growth and vibrancy of communities in Northeast Ohio. She also leads the collaborative efforts of the senior program team to strengthen democracy building and civic engagement strategies statewide.

Prior to her role with the foundation, Alesha was the Vice President of Government Advocacy for the Greater Cleveland Partnership, one of the largest chambers of commerce in the country. In her role, she served as the lead advocate on local, state and federal policy issues impacting the Northeast Ohio business community and economic development efforts. Alesha has also held senior government relations roles with Cleveland Neighborhood Progress and the Centers for Families and Children. Her civic involvement includes serving on the boards of the Cleveland Public Library and the Center for Community Solutions.  She is a 2019 Association of Chamber of Commerce Executives 40 Under 40 honoree, 2017 Crain’s Cleveland 40 Under 40 honoree, 2015 American Marshall Fellow of the German Marshall Fund of the United States, and a 2013 inductee to Kaleidoscope Magazine’s 40/40 Club.

Alesha received her undergraduate degree from Oberlin College and her Masters of Nonprofit Management from Case Western Reserve University.